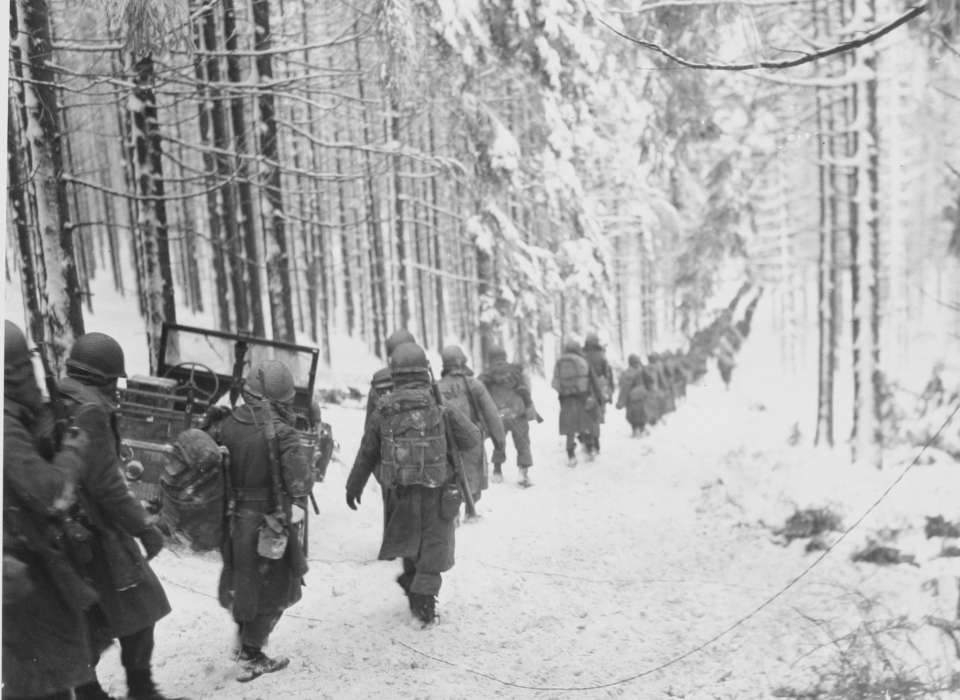 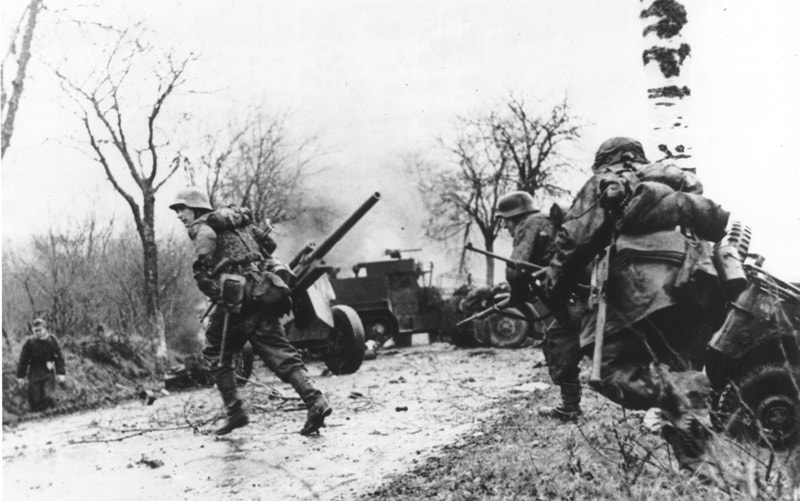 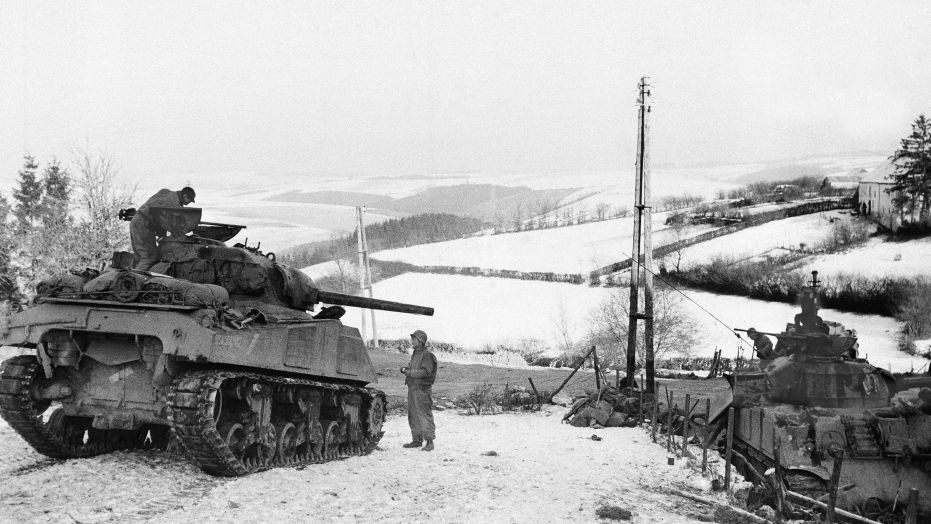 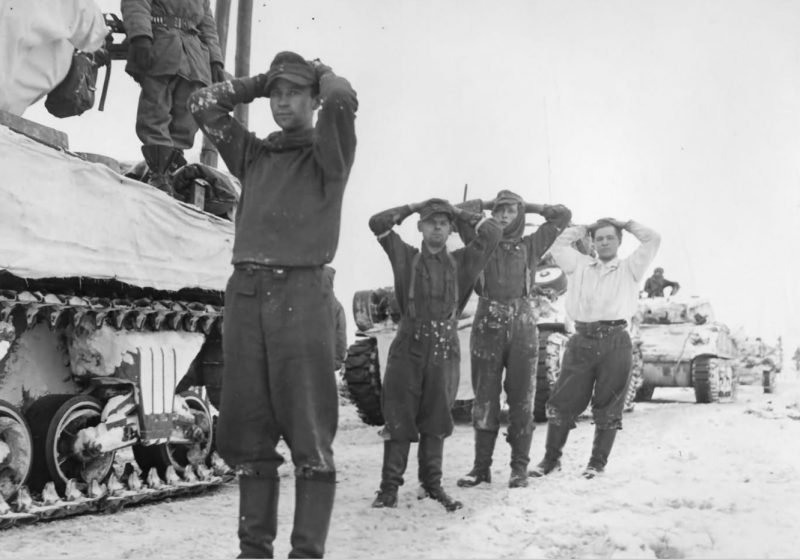 Today marks the 75th anniversary of the Battle of the Bulge of World War II. Though the campaign lasted through January, this was a major turning point for the war as it was the last offensive strike from Nazi Germany. A combination of factors led 6 Allies to stop the maneuver and begin the counter to bring the war to an end. The summary below from Encyclopedia Britannica best summarizes what happened that gave the allied forces the advantage to prevent the Third Reich from moving forward

Battle of the Bulge, also called Battle of the Ardennes, (December 16, 1944–January 16, 1945), the last major German offensive on the Western Front during World War II—an unsuccessful attempt to push the Allies back from German home territory. The name Battle of the Bulge was appropriated from Winston Churchill’s optimistic description in May 1940 of the resistance that he mistakenly supposed was being offered to the Germans’ breakthrough in that area just before the Anglo-French collapse; the Germans were in fact overwhelmingly successful. The “bulge” refers to the wedge that the Germans drove into the Allied lines.

After their invasion of Normandy in June 1944, the Allies moved across northern France into Belgium during the summer but lost momentum in the autumn. Apart from an abortive thrust to Arnhem, Netherlands, the efforts of the Allied armies in western Europe during September and October 1944 amounted to little more than a process of nibbling. Meanwhile, the German defense was being continuously strengthened with such reserves as could be relocated from elsewhere and with the freshly raised forces of the Volkssturm (“home guard”). German numbers were also bolstered by those troops who had managed to withdraw from France. A general offensive launched in mid-November by all six Allied armies on the Western Front brought disappointingly small results at heavy cost; continued efforts merely exhausted the attacking troops.

In mid-December Gen. Dwight D. Eisenhower, the supreme commander of the Allied Expeditionary Force, had at his disposal 48 divisions distributed along a 600-mile (nearly 1,000-km) front between the North Sea and Switzerland. For the site of their counteroffensive, the Germans chose the hilly and wooded country of the Ardennes. Because it was generally regarded as difficult country, a large-scale offensive there was likely to be unexpected. At the same time, the thick woods provided concealment for the massing of forces, whereas the high ground offered a drier surface for the maneuvers of tanks. An awkward feature from an offensive point of view, however, was the fact that the high ground was intersected with deep valleys where the through roads became bottlenecks where a tank advance was liable to be blocked. The aims of the German counteroffensive were far-reaching: to break through to Antwerp, Belgium, by an indirect move, to cut off the British army group from American forces as well as from its supplies, and then to crush the isolated British. Overall command of the offensive was given to Field Marshal Gerd von Rundstedt.

The Fifth Panzer Army, led by Hasso, Freiherr (baron) von Manteuffel, was to break through the U.S. front in the Ardennes, swerve westward, and then wheel northward across the Meuse, past Namur to Antwerp. As it advanced, it was to build up a defensive flank barricade to shut off interference from the U.S. armies farther south. The Sixth Panzer Army, under SS commander Sepp Dietrich, was to thrust northwestward on an oblique line past Liège to Antwerp, creating a strategic barrier astride the rear of the British and of the more northerly American armies. To those two panzer armies the Germans gave the bulk of the tanks that they could scrape together. To minimize the danger from a speedy intervention of Anglo-American air power, which was vastly greater than their own, the Germans launched their stroke when the meteorological forecast promised them a natural cloak; indeed, for the first three days, mist and rain kept the Allied air forces on the ground.

Aided by its surprise, the German counteroffensive, which started before dawn on December 16, 1944, made menacing progress in the opening days, creating alarm and confusion on the Allied side. The Fifth Panzer Army bypassed Bastogne (which was held throughout the offensive by the U.S. 101st Airborne Division under the tenacious leadership of Gen. Anthony McAuliffe) and by December 24 had advanced to within 4 miles (6 km) of the Meuse River. Time and opportunities were lost, however, through gasoline shortages resulting from wintry weather and from growing Allied air attacks, and the German drive faltered. This frustration of the German advance was largely due to the way in which outflanked U.S. detachments held Bastogne and several other important bottlenecks in the Ardennes as well as to the speed with which British Field Marshal Bernard Montgomery, who had taken charge of the situation on the northern flank, swung his reserves southward to forestall the Germans at the crossings of the Meuse.

Gen. George S. Patton’s Third Army relieved Bastogne on the 26th, and on January 3, 1945, the U.S. First Army began a counteroffensive. Between January 8 and January 16 the Allied armies concentrated their strength and were attempting to pinch off the great German wedge driven into their front, but the Germans carried out a skillful withdrawal that took them out of the potential trap. Judged on its own account, the Battle of the Bulge had been a profitable operation for Germany, for, even though it fell short of its objectives, it upset the Allies’ preparations and inflicted much damage at a cost that was not excessive for the effect. Viewed in relation to the whole situation, however, the counteroffensive had been a fatal operation. While the Allies suffered some 75,000 casualties, Germany lost 120,000 men and stores of matériel that it could ill afford to replace. Germany had thus forfeited the chance of maintaining any prolonged resistance to a resumed Allied offensive. It brought home to the German troops their incapacity to turn the scales and thereby undermined such hopes as they had retained.